After I wrote this post I read rules by myself and found out, that we made many mistakes. 18xx games are complex, but that was a big fail… I didn’t read rules before play, because Marcin prepared short rules summary, and I was thinking that it was good. But it wasn’t. One of the ommited rule was: “Yellow tiles with two small towns may be upgraded to a green tile with a city (tiles #14, #15, and #619).”… With this rule my SD company wouldn’t be as weak as it was. So keep in mind, that we made such a big mistake, but I hope that you still will enjoy this article.

Last saturday we meet at Noc Gier Planszowych in Mysłowice, and since I want to play all our 18xx games, we choose 1854. We have got Lookout Games edition, where on one side you can find 1844 and on the other side is 1854. It’s a great idea because paying for one box you get two different games. I translated rules for 1854 few months ago (still didn’t upload them to BGG because I have to put them into original graphics) and when I was translating I was thinking that there’s nothing special in this game. How wrong I was… 😉

Me, Marcin (Magole) and Maciek. This time Michał from Olkusz was on the vacation, and Jacek, who always played with us 18xx games in Mysłowice, was playing different title.

How do we started?

The start was strange, because only Maciek wants to buy private companies at the begginig. Of course me and Marcin also bought, but only 1 private. Maciek took first, Marcin second and I bought that one, which gave you +10 to Graz. After that Maciek bought local railway 1, I put my bid on last company (which gives you 20% of SB) and Marcin passed. Then nobody wanted to bought anything so our privates pay out. And they did that few times. In meantime I put my bid on last but one private, Maciek put bod on last one. Then Marcin bought local “3”, I bought “4”. Marcin “5”, me “6” and then I bought last but one private and I was competing with Maciek to bought last one. I won that, so after first stage I controlled 3 private companies with income 60, and 2 local railways. To be honest I wasn’t sure that they are good, because Marcin said that in his first play in 1854 this companies are weak. He and Maciek was playing 1854 for the second time, for me that was first play.
The whole map is really tight and you have to plan every move before you build something. I have to sleep better before our gaming nights because I did too many mistakes with placing tracks. Too often I assume that green tiles will be soon, but they don’t 🙁 This time I also forgot to look at green tiles, because if I did, then I would realised, that there are no upgrades for litte towns 😐 My biggest mistake on the big map was placing tile number 2 on the south-east of Wien. I did so, because I was thinking that I will be able to upgrade it or build tunnel and my SD will reach Graz… (Now I know, that I could do that…)
But let’s go to this litte map for local railways. At first you might be thinking that this is some kind of mini-game which is only for fun, but when I was thinking about our play next day, I realised, that there are so many opporutnities to do a little money-maker company. Since Maciek controlled local “1” and “2” then he could build 2 tracks for his companies, and that’s why he made really good income with them. His companies were so good and he was able to bought train “4” for localbahn when he was forced to merge his local companies. We (me and Marcin) were not so lucky with local’s and we merged them just in phase “5” because they didn’t made good income on minimap.

And what was happend on big map?
I run SD, but with placing that tile numer 2, I ruined all good connections for this company. Marcin ran KT but he did only connections between two red off-board areas. Maciek did better with his KE, because he prepared tracks to the west and in few SRs later he was able to ran KR.
Because I had already 20% of VB then I ran it and I was trying to build route to Wien. That wasn’t easy because Marcin blocked the middle of the map with 2 tunnels and with stations in Salzburg. That was because he ran SB and NT. In meantime Marcin was attempting to dump KT on me, since that company has no good connections and has bad trains. I was happy that I was first in next SR so I sold all 40% of KT shares. But Marcin used nice option and he sold also 40% of KT shares, leaving himself only presidents certificate. This is so nice in 1854 that you can sell everything but president share to stock market. Using this opportunity he was able to start next company high, bought 2 trains to new company and then he sold one of this trains to KT. In this way he saved KT and that was his first step to win the whole game. I was trying to do my best, but too many mistakes made it harder 🙁 There was one moment when I thought that I could rebound. When first trains 5 were on the table I set up my two companies – SD and VB to do nasty things on Marcin 😉 I was trying to dump SD to Marcin and I was one OR to do that… But then Marcin bought train 8, and my train 4 from SD rusted… now I was forced to help SD instead of Marcin…
In this moment I finally realised that there is not only no chance to stop Marcin with his win, but I have to do more to ended at second place. I bought train “8” to SD and at the end of the game I was able to generate 250 income… Only this and investing in companies controlled by Marcin gave me second place.

What should I improve:

That was nicely spended 6 hours of playing. The map isn’t big, and there are some restrictions with tunnel laying, and that’s how Marcin blocked half of the map. Idea with split shares is great and there are many ways how to use it. Maybe you should keep your company in low share price just to generate money for trains? I lost this game to Marcin, but after that I don’t feel sad. We were talking about our play for more than half an hour to figure out what was the crucial. Today, we know that we have to play one more time, because we didn’t use rule which allows upgrading 2-towns-tiles to bigger city. With this knowledge I guess that my SD wasn’t as badly located as I did with laying track 2. 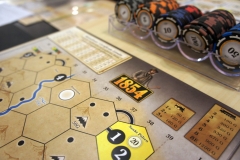 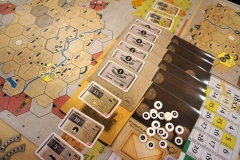 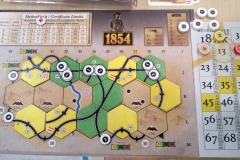 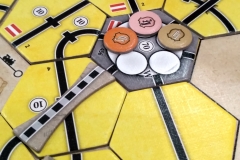 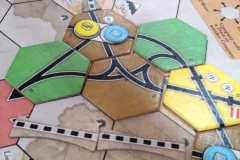 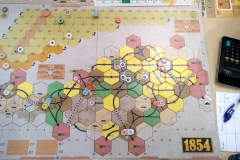 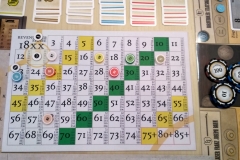